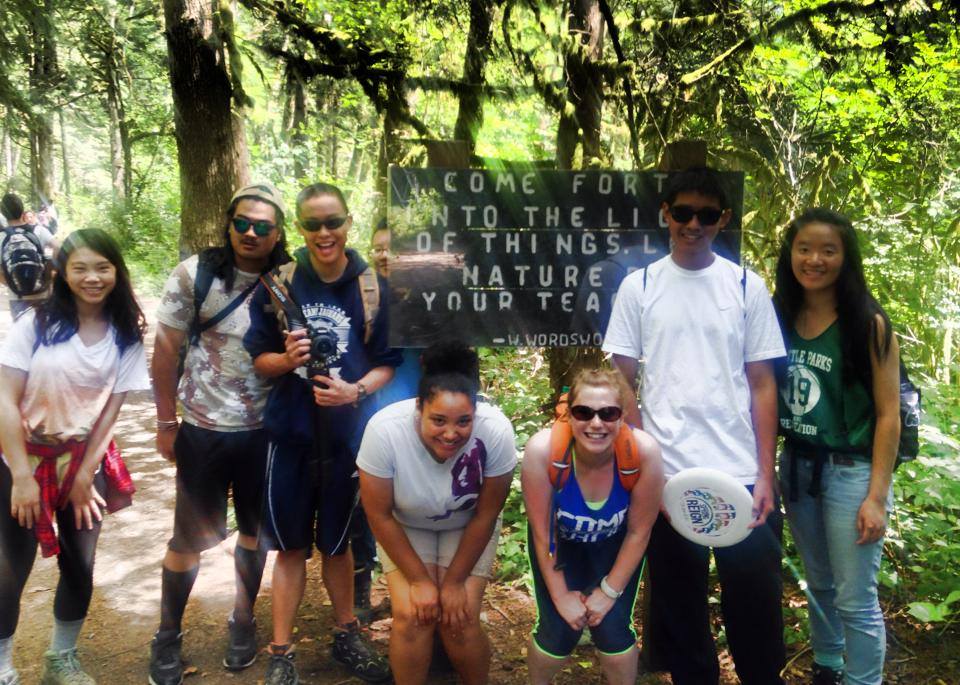 I do not like hiking. I do not find joy in walking for hours in the sun just to see a view. If I wanted to see and pretty view of a waterfall I would pick up a National Geographic or look it up on the Internet. So when my sister Chiloe, who works for tSB, told me that I would be hiking I was less than thrilled… By admin | Events | No Comments

We have some sweet opportunities to come hang out with tSB this summer – hiking trips, service projects, BBQing! Sign up by clicking the links and we’ll follow up with the complete details. We can’t wait to see you!

Blowing on a colorful diamond

Hot time summer in the city! tSB youth have been spending the summer out in the sun learning how to skateboard, getting sweaty working on community projects, and working literally in the heat of it learning to blow glass. At our most recent glass blowing trip one of our tSB participants took a moment to share his thoughts on the experience of glass blowing and what was running through his mind as he created his first piece of glass art. 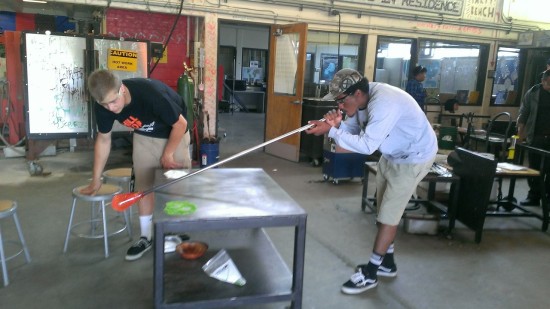 Blowing on a colorful diamond

On the day of Aug 12, 2013 I experienced a burning sensation–literally. Blowing glass is not as easy as it seems but is definitely worth it. There are a lot of complicated processes in glass blowing. In the process I was able to make a good looking bowl big enough for a man like myself.

Contradiction of the other
A pool
The equator
Alaska
Blowing on the colorful diamond, huge.
Exciting in Burien. 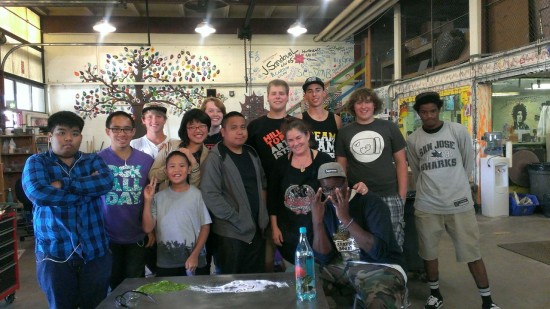 By admin | Show Love | No Comments

Prisca Youn is the liaison to tSB for the Rudy’s tSB Summer Internship. Her infectious smile and work ethic constantly inspire others to find joy in completing every task they start to the best of their ability regardless of how small or large that task is. Thanks Prisca for being so awesome!

Written by Anika and Chiloe

Last weekend tSB took a trip to Portland for our first annual Summer Retreat! We went to Portland because the Rose City was hosting this year’s Street League competition. Street league is an international completion for professional skateboarders hosted by ESPN 2 and put on by Nike SB and a bunch of other dope sponsors. tSB totally got the royal treatment. 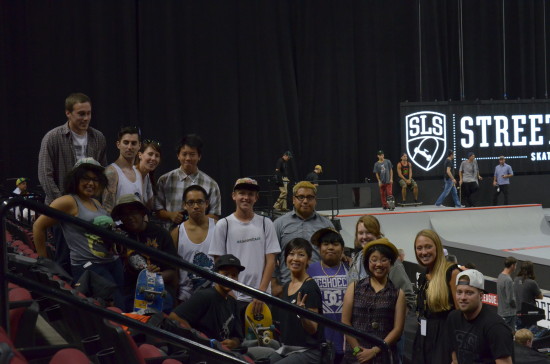 We stopped at the food trucks in downtown Portland for a hasty lunch before dropping off our stuff at the Portland State University dorms. Eager to get to it, we headed straight to the Rose Garden Arena where we spent most of the afternoon. The skaters in the group, that is, most of us, were really geeked to see some guys like Torey Pudwill (who gave one of our own a pair of headphones) and David Gonzalez, hanging out and signing stuff at the entrance. On our way out, Eric Koston and his kids were there. You should’ve seen some of our dudes’ faces. It was adorable. We got an amazing tour of the arena from Street League extraordinaire Yulin which included an exclusive look at ESPN’s central media command! Before leaving the arena, Yulin and her team told us all about how they started working with Street League and how the skills we learn at tSB could help us great, creative jobs like that too. Finally, we watched the pros practice for a bit before heading to Ed Benedict Skate Park to do some practicing of our own. 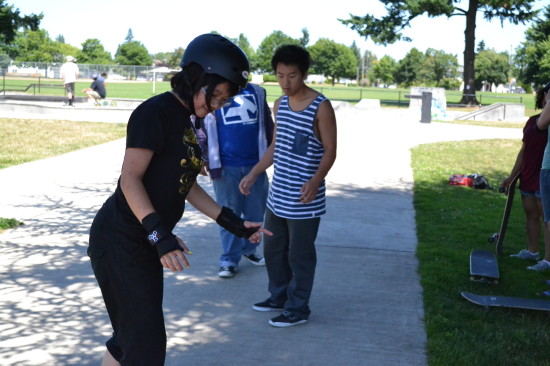 That night we made pizza together and bonded as a group. After an early morning Voodoo Doughnuts breakfast run the next day, we stopped at the famous Powell’s Bookstore and visited one more skatepark to practice before heading back to the Rose Garden to watch Street League 2013. It was an AWESOME weekend.

Last week we showed off our summer program accomplishments with a tSB art gallery opening at the Piranha Shop. More than 50 people came through to see their photography, silk screens, drawings and blown glass. After student speeches and a graduation ceremony, we premiered their culminating project: this awesome tSB video.

With help from the rad women at Puget Sound Creative, tSB students learned to storyboard, film, interview and edit to produce the following documentary. Please enjoy, and if you’re inspired, consider making a donation to support more of this kind of programming and vote for tSB through the Chase Community Giving campaign!

Step out to the tSB Art Walk

Summer is drawing to a close and tSB is showcasing the amazing work Seattle youth have been doing throughout the greater Seattle area.  During the summer months many teens are faced with a large amount of time and very few positive ways to fill it. tSB has answered this community issue by giving youth the opportunity to explore positive expression through art,  volunteer opportunities and skateboarding. Now our youth want their story to be heard through the Art of tSB 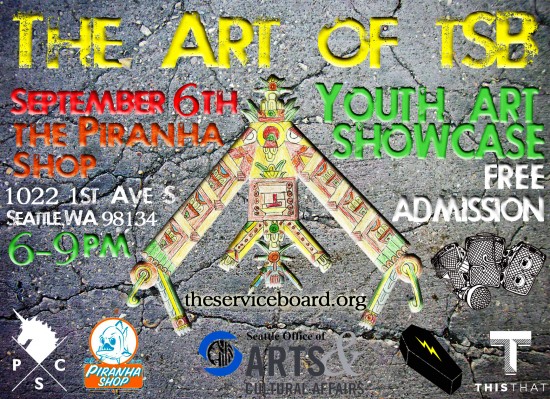 Come hear and help share this story.  Our youth have spent the summer learning the art of documentary films and have crafted their own films about their summer in tSB. They have been educated by Puget Sound Creative in every aspect of building a film including storyboarding, interview and marketing. The youth have filmed their skateboarding progression and the impact of their service learning projects around different Seattle skate parks. The summer has also included other art projects that will be on display including silk screening, bench making and glass blown pieces.  In order to give the full spectrum of work in the arts, the youth were introduced to careers in the art field including touring the Mervin Manufacturing company and seeing how art and design make can come together to make snowboards!

The event is free and open to the public. There will be light hors d’ oeuvres and a short presentation to highlight the impact of the tSB Arts in Service program.

the Summer Board according to Tyvon 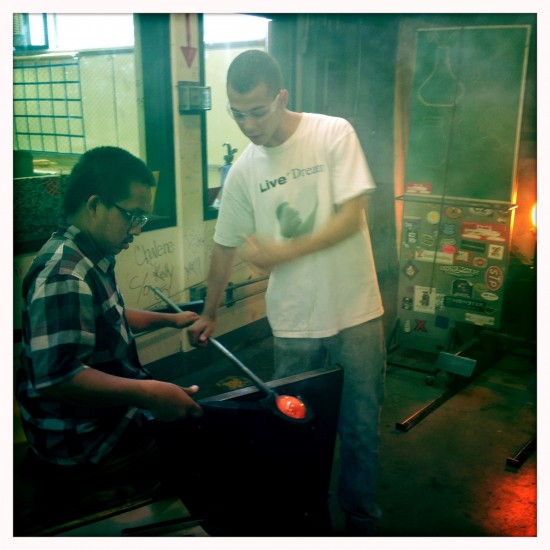 The tSB Summer Program… Dang, there’s so much to say about it, yet, I could never really grasp everything in a paragraph. I’d like to first start off though, that I really am grateful to have joined the program. Much like the winter program, we alternate between service projects, and boarding; it’s just that in the summer, we skateboard, not snowboard, and yup, just as thrilling. This occurs on the Mondays that we meet, and on Wednesdays, we go to various places such as glass blowing in Tacoma, to staying at Youngstown to work on our video project component of the program. I seriously love and appreciate this program because not only do I get time to go to different places and skate, this program benefits me as a person and a student. While getting our service hours, we get to learn things such as gardening, and mentioned before, glass blowing! All while meeting new people who all have dope personalities. Not only do these things help us in the future, it leads us to finding a new way to express ourselves. All I have to end this is that this is such a sick program and I recommend it to any high schooler who not only wants to get their hours done, but to try new things. And of course, thank you to our sponsors and teachers! 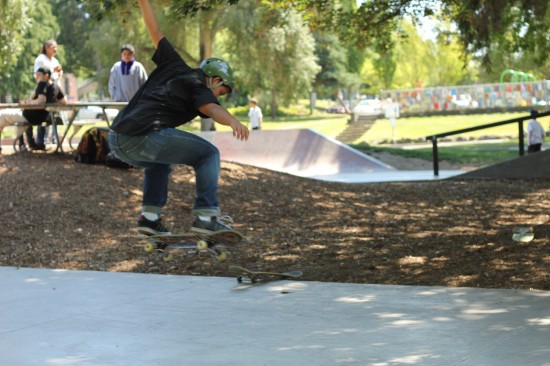